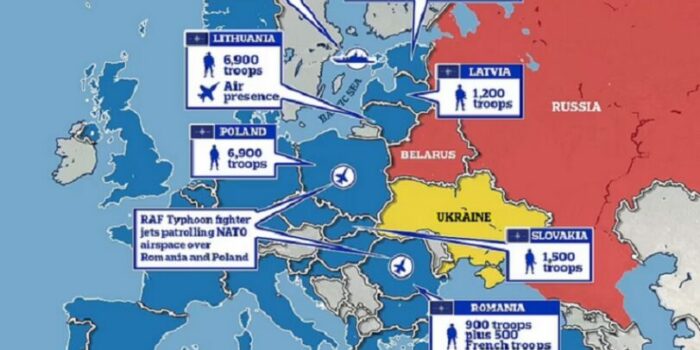 The Baltic countries’ approach to NATO demonstrates that Russia’s concern is real and that its operation in Ukraine is necessary.

George W. Bush once said ” anyone who would choose Lithuania as an enemy has also made an enemy of the United States of America. In the face of aggression, the brave people of Lithuania, Latvia, and Estonia will never again stand alone,” That was Bush’s speech when he visited Lithuania in 2002, shortly after the Baltic states received an offer to take NATO membership, according to journalist Michael Gerson in this report.

Those who follow international events closely and are not committed to the bourgeoisie interests, the increase of NATO’s influence in Eastern Europe is not a recent issue and is the main reason for Russia’s action in Ukraine today.

NATO, the North Atlantic Treaty Organization, originated in 1949 and has not stopped expanding since then. Even after numerous discussions about the risks, and negative consequences that such expansion could cause. The establishment press and its consortia present in every country of the globe, try day after day to convince people that Russia is imperialist and that its action in Ukraine is nothing more than Russia’s thirst for other countries and expansion of its borders.

A farce! And this farce is being dismantled day after day. Experts or investigators will not be able to disprove this fact. Reality imposes itself because the farce is as shallow as a saucer. Despite the forced attempt to change reality, the crisis of imperialism cannot keep the democratic suit they insist on wearing, but truthfully is just a disguise.

Recently, Putin said he would consider a series of measures to expand Russia’s security if Finland or Sweden join NATO. He is right, Russia and Finland have 1,300 km of land border, a number close to the size of the land border between Brazil and Paraguay (1367 km), for example.

A few days ago, the former Russian president and current vice-president of the Russian Security Council, Dmitry Medvedev, said, “No one in their right mind should bet on the consequences of the movement considered by Sweden and Finland”, also “If Sweden and Finland enter NATO, the extension of the alliance’s (NATO) land borders with Russia will more than double … and of course, these borders will have to be strengthened.” In other words, the Baltic countries’ accession to NATO would be the consequence of Russia’s strengthening in the region and not be the cause, as the bourgeois press claims.

Obviously, these decisions tend to be very delicate for a number of reasons, among those there is the popular support on such program and the crisis that could open up within these countries. We have recently published an article with title “The Swiss are against NATO membership and they also reject sending arms to Ukraine.” A recent enquire, at the beginning of the year, also showed that the Finns are opposed and have historically shown rejection of this measure, showing an opposition of around 40% in a January survey this year.

On February 2022, an article published by the Wilson Center, an American think tank, entitled “Sisters, but not twins: prospects for Finland and Sweden’s NATO membership” discusses the problems and options of these countries in joining NATO. Despite all the pro-NATO and pro-imperialist propaganda, excerpts from the article reveal interesting information about the history of cooperation between these countries, especially Finland-Russia.

On the popularity of the theme among the Finnish population, for example, the article brings an image that reveals the size of the problem.

Although pro-NATO analysts always look at the glass half-full, or always try to fill the glass artificially, and try to say that support for NATO is increasing, the fact is that for the population there is no consensus and that rejection is still high.

An excerpt of the text reveals facts such as: “Opponents emphasize, firstly, the loss of Finland’s non-aligned military status. Secondly, a considerable financial burden, and thirdly, readiness to provide Finnish military soldiers and equipment to common NATO causes as arguments against NATO membership. Moreover, the argument is that, as Finland already spends a large amount on defence (4.87 billion euros or approximately 2% of GDP [14] in 2021), it prefers to invest additional resources in other areas, such as education and health.”

In another excerpt, he points out key economic issues that would have serious consequences for Finland, such as: “Finnish membership of NATO would also significantly weaken The Finno-Russian trust, a bond that the two countries have repaired and maintained carefully since the mid-1940s, and could lead to Russian aggression against Finland. Finland currently depends on energy imports from Russia. As of 2019, Finland imports approximately 60% of its energy from Russia. In addition, Finland has important bilateral trade relations with Russia: Russia was the fourth largest importer of Finnish products in 2017.”

Biden, in a video that has gone viral on social media recently, said in a speech in 1997, “I think the only place where the greatest consternation would be caused in the short term for admission [to NATO], having nothing to do with merit and the country’s preparation to enter, would be to admit Baltic countries now in terms of NATO-Russia relations, U.S.-Russia” Biden said in his speech. “If there was ever anything that could change the balance, if it were to be overturned, in terms of a vigorous and hostile reaction in Russia, I don’t mean military, that would be it.”

In other words, Russian action in Ukraine is extremely accurate. NATO’s threat to Russia is real and has increased every day. We must stop the imperialist offense in the region in the interests of all countries oppressed by imperialism, and therefore support for Russia is essential.

Let us not be fooled, imperialism may try to wear all the clothe, of democracy, of minority identity, but its true face is revealed with each passing day.