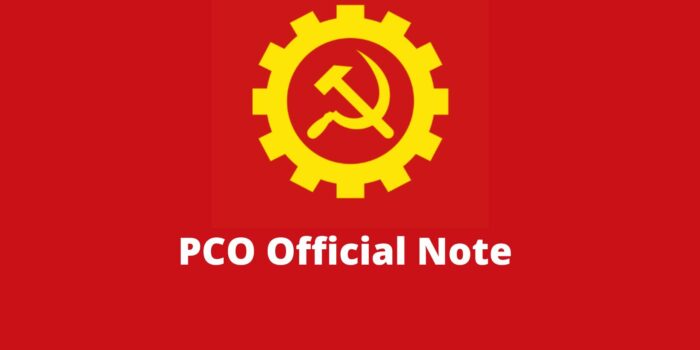 PCO publishes Official Note on the blocking of its accounts by the STF
Party was included in the “fake news” investigation and will have its accounts blocked.

On Thursday (2), Minister Alexandre de Moraes of the Supreme Court (STF) decided to include the Workers’ Cause Party (PCO) in the “fake news” investigation. As an extension of the measure, he also demanded the blocking of its social media accounts.

In response, the Party published an Official Note, available below in full.

Very close to the elections, the Supreme Federal Court shows its face and orders censorship of the PCO
The Minister of the Supreme Court (STF) Alexandre de Moraes has just determined, according to Veja magazine, the blocking of all PCO accounts on social media networks. The magazine points out that Moraes would have included the Party in the Fake News investigation, where Bolsonarist journalists and militants have been investigated. The unelected minister accuses according to the aforementioned vehicle our Party of attacking the Democratic State of Law a charge he initially launched against the Bolsonarists.

The STF’s crusade against democratic rights has reached a new stage. They censor a legal political party for disagreeing with the actions of a court for considering that its flagrant abuse of power is a blow against the democratic regime. For defending democracy we are being accused of attacking it.

Alexandre de Moraes declared that he would disqualify candidates who incur the “crime” of spreading news that he considers to be false just as he has already disqualified members of parliament for the same reason. We point out the obvious abuse of power and that it is not legitimate to revoke the mandate of congressmen for speaking.
In the case of the candidates it is an open interference in the electoral process an attempt to manipulate and define the elections by bypassing the will of the people.

Speaking does not undermine democracy. The right to speak is the core of any democratic regime. Speaking out, denouncing and opposing the abuse of power is not an attack on democracy it is the soul of the democratic rule of law.

PCO has systematically denounced the curtailment of democratic liberties by the STF and the judiciary in general. We did this when they trampled on the right to the presumption of innocence, and under the baton of General Villas Boas, they arrested President Lula and illegally revoked his political rights.
Then we saw the STF forbidding the name Lula to be spoken in the election and the PT itself campaigning with the name of its leader who had become the biggest political prisoner in the history of Brazil.

After Dilma and Lula, the coup regime has trampled on rights: parliamentarians are imprisoned for speaking out, press organs are censored, protesters are arrested without even having acted violently. The Supreme Court acts not as a constitutional court, but as the opposite: a court of exception.

Alexandre de Moraes, a PSDB politician turned judge, is a party in the process, a supposed victim, investigator and judge. The man who was responsible for the brutal repression of the PSDB in São Paulo acts as if he owned the country.

For a long time we warned the entire left wing of the risks that was to omit itself before the abuses of this court. Now, four months before the elections in the midst of the organization of a bankers’ candidacy, the STF turns on the left and strikes a blow against the PCO. We may be the first in this new wave of attacks against the left but we will not be the last.

We call on all workers’, popular and exploited people’s organizations to rise up against this further abuse. We call all people who defend freedom as a fundamental right to stand up in defense of this universal right.

As a party, we have always been against the figure of unelected power. We now see a good example of why. Minister Alexandre de Moraes wants to dictate how the political debate will go, even though he did not have a single vote. He answers to no one but the dominant interest in the capitalist state, that of big imperialist capital, mainly the US.

We call on everyone to repudiate this very serious attack on democratic freedoms, the left and the workers’ movement.

We demand the annulment of this aberrant inquiry and the restitution of all our social media networks.

It is necessary to demand the end of the Supreme Court, as the power that defines, that is, that can modify what the Constitution says. We must demand direct elections for the Judiciary! For the end of the STF!